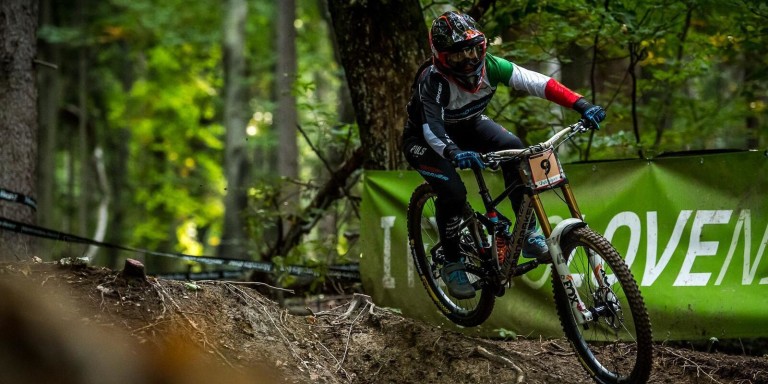 Unstoppable Eleonora nails it at Maribor!

And for Eleonora it was two superb podium finishes in two World Cup races on her Mondraker Summum, set up with super reliable qualifying across a packed four days of back-to-back runs at the exciting yet challenging Maribor track.

After qualifying fourth fastest for the year’s first World Cup finals Eleonora made a steady start on Friday 16th through some sticky mud in the open section before picking up time with neat technique on her Summum in the forest and lower sections. She lit up the later race sectors green, finishing fourth place for a fine podium to match her Crankworx Innsbruck season opener.

On Sunday 18th the second race was even better. Sealing the third fastest time in quali, could Ele repeat her feat and match it on race day? On a drying track the Italian went more than 10 sec quicker than the first final and grabbed third for her best DH World Cup finish yet.

Next up for Eleonora is the Italian Champs, with the finals to be held at St Gréé on Sunday 25th.

“I’m so happy about last week and the results we were able to reach!Long and exhausting two races in a row and being on the podium in both makes me so proud.  I’m stoked with the improvements I did during this year and I can’t thanks enough all the team and our supporters to help me and make everything possible!”

How did the guys do?

With no Laurie Greenland, who was having remedial surgery for the thumb injury earned in his uncompromising World Champs appearance, it was Mike Jones and Brook Macdonald flying the MS Mondraker colors in the men’s Elite races in Slovenia on their Summum DH rigs.

With 80 Elite men looking to grab anything they can from 2020’s crazy short race season, it was another intense competition. Mike put in a strong first race qualification of 33rd, converting it to 18th – great to be in the top 20. Pushing hard a crash in quali 2 meant the Welshman couldn’t improve on Sunday.

Brook admitted he struggled to get his head around the first race, but was growing well as the quickfire week continued. After 39th in his first World Cup race since returning from his spine injury the New Zealander converted 28th in quali 2 to a strong 23rd position in Race 2.

“Today I flipped it all and made a difficult situation for myself into something I can be proud of: 23rd a year later from an accident that I thought would of ended my career, I’m proud of what I’ve done and achieved and now it’s time for some down time. Till next year, thank you to each and everyone of you that has supported me,” said Brook.

The weekend wasn’t all about the Downhill though. Mondraker riders were also racing in the Cross-country European Championships, with Podium and F-Podium XC bikes fettled for battle in Switzerland.

In the Juniors, young Spanish riders Francesc Barber and Sara Méndez raced their Mondrakers to good effect, with Francesc breaking the top-20, and both looking great prospects for the future.